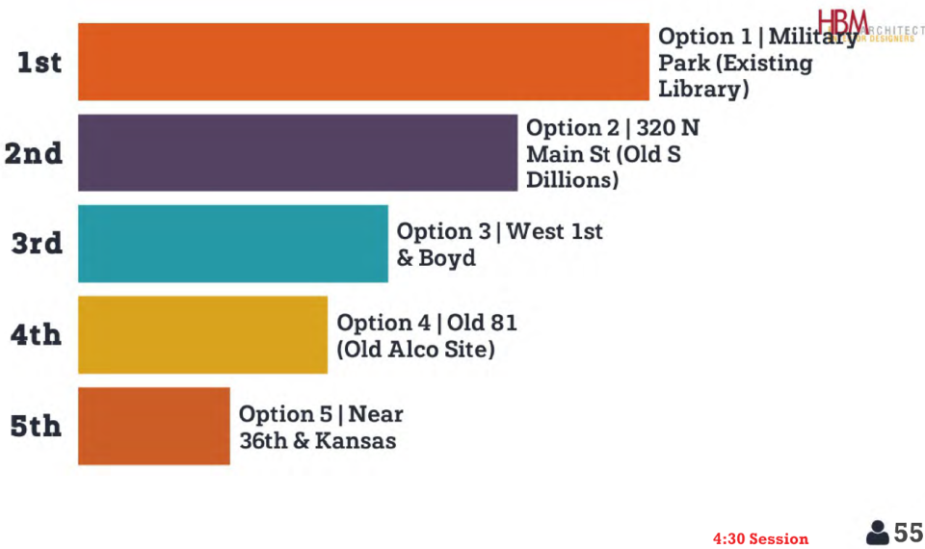 From the City of Newton:

In both meetings, attendees said the most important factors to consider were convenience/ease of access, proximity to downtown and adequate parking. They also considered site visibility, proximity to schools or new residential development, surrounding land use, ease of pedestrian access, green space, possibility of future expansion, and site acquisition costs.

Attendees were then asked to rank five possible locations. After the two downtown sites, the preference was for West First Street and Boyd, north Old 81 (the former Alco site), and a south-side location (near 36th Street and Kansas), in that order. Attendees also had the opportunity to suggest other possible locations.

About 100 people attended the sessions on Oct. 30, which were led by the consultants from HBM Architects.

The consultants will now “test fit” each possible site, considering size, shape, access issues, etc. and will bring back a report at a joint work session of the City Commission and Library Board at 5:30 p.m. Nov. 26 at City Hall.

The City Commission will then make a final selection at their Dec. 10 meeting.

Community meetings to provide input about design and uses of a new library are tentatively planned for January.