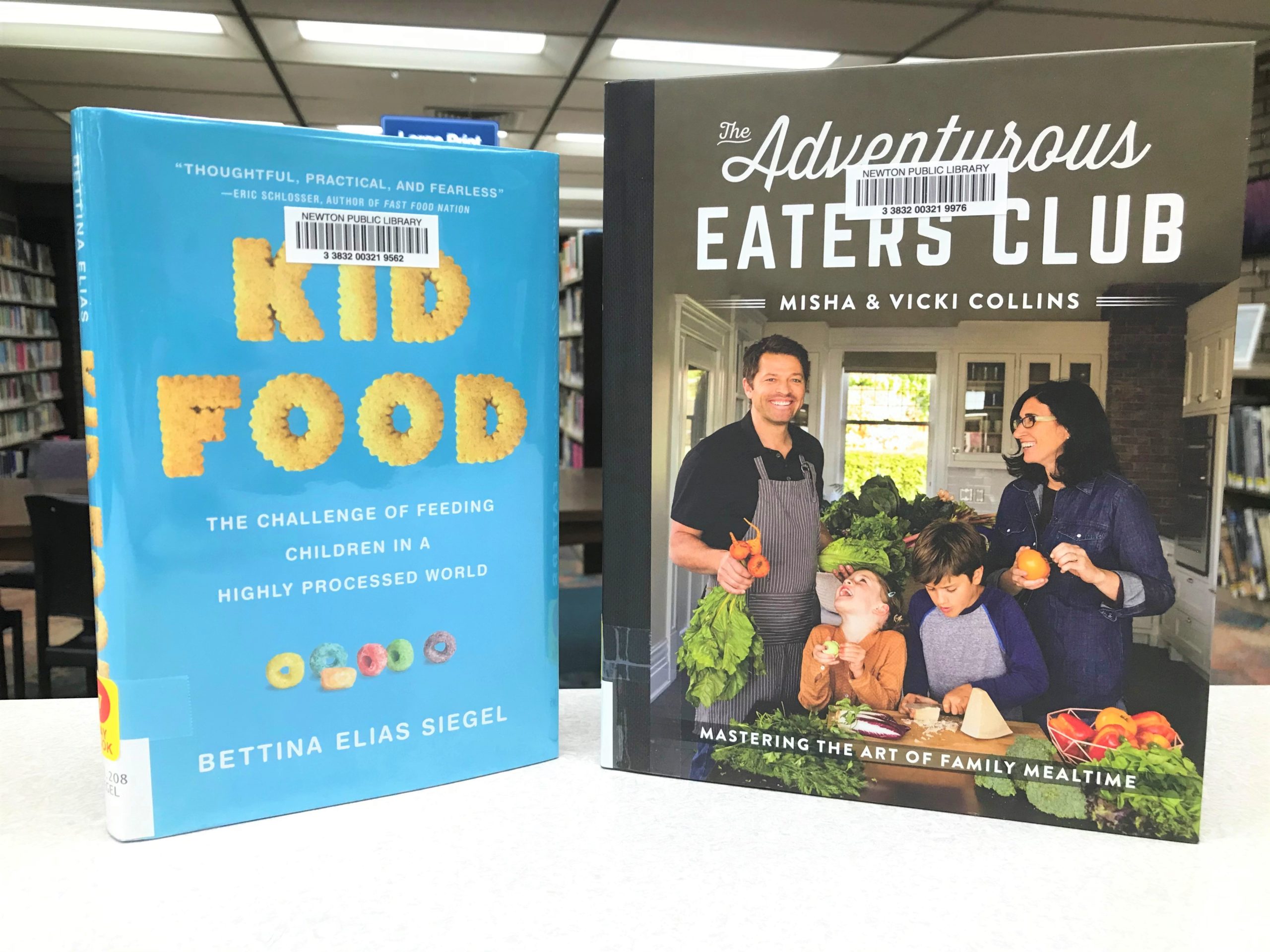 In many homes, the family dinner table can be a scene of conflict—and that’s if kids make it to the dinner table in the first place.

How do you make sure your kids eat a healthy diet? And how do you impart a positive attitude toward food and eating, while minimizing tears, shouts, and hurled bits of broccoli?

Two new books, “The Adventurous Eaters Club,” by Misha and Vicki Collins, and “Kid Food,” by Bettina Elias Siegel, set out to help parents answer those thorny questions. Both are now available at Newton Public Library.

The Collinses were inspired to write an “adventurous” family cookbook after their son, West, “began refusing any food that wasn’t bland and beige.” At first the parents gave in, sick of endless mealtime battles.

“We felt like slackers, but we couldn’t figure out how to get our kid to eat healthy meals,” they wrote. “Besides, we didn’t have time to cook anyway, so what was the point? It was all too overwhelming, and when his baby sister was born, it only felt harder.”

The couple tried every kind of cajoling to get their kids to eat healthy, from a hard line approach to increasingly ardent bribery attempts. Then they concluded that none of those strategies were sustainable. What worked for them was inviting their kids into the kitchen.

Letting kids explore the “Culinary Frontiers” doesn’t result in delicious meals every time, but, “in the process, your kids become curious and enthused about food,” the authors wrote. “You also might laugh with your kids, create something unexpectedly delicious, and have a family adventure that makes your kitchen feel like a playground.”

Many of the cookbook’s recipes have simple steps helpfully labeled as “Kid’s Job,” making it clear how young ones can get involved.

In 2010, as a mom dismayed by the food her children were being served at school, Siegel launched a blog, The Lunch Tray, to chronicle her activism. “Kid Food” functions as a distillation of the blog, which she is still writing after nearly a decade.

Parents looking for specific strategies to get their kids to eat, say, onions, would do better to turn to “The Adventurous Eaters Club” (which has a whole chapter devoted to the controversial vegetable). But anyone interested in cultural and political forces that inform children’s seemingly innocent or “natural” food preferences will find a lot to chew on in “Kid Food.”

Siegel concludes with four “wishes”—public policies that she believes would improve children’s lives and health.

Among other ideas, she advocates banning, or at least curtailing, the marketing of food to children; creating programs to give all children access to the culinary exploration advocated by the Collinses; and upping the amount of government funding for school meals in order to match the sums spent in other advanced economies like France ($7 or more per meal) and Japan ($3 per meal for ingredients alone).

The U.S. school lunch program pays $3.41 for each free meal served, a sum that has to cover ingredients, labor and overhead.

Interested in these books? Use the online catalog to place a hold request, call NPL at 316-283-2890, or stop in and ask a staff member for help. Newton Public Library is located at 720 N. Oak.