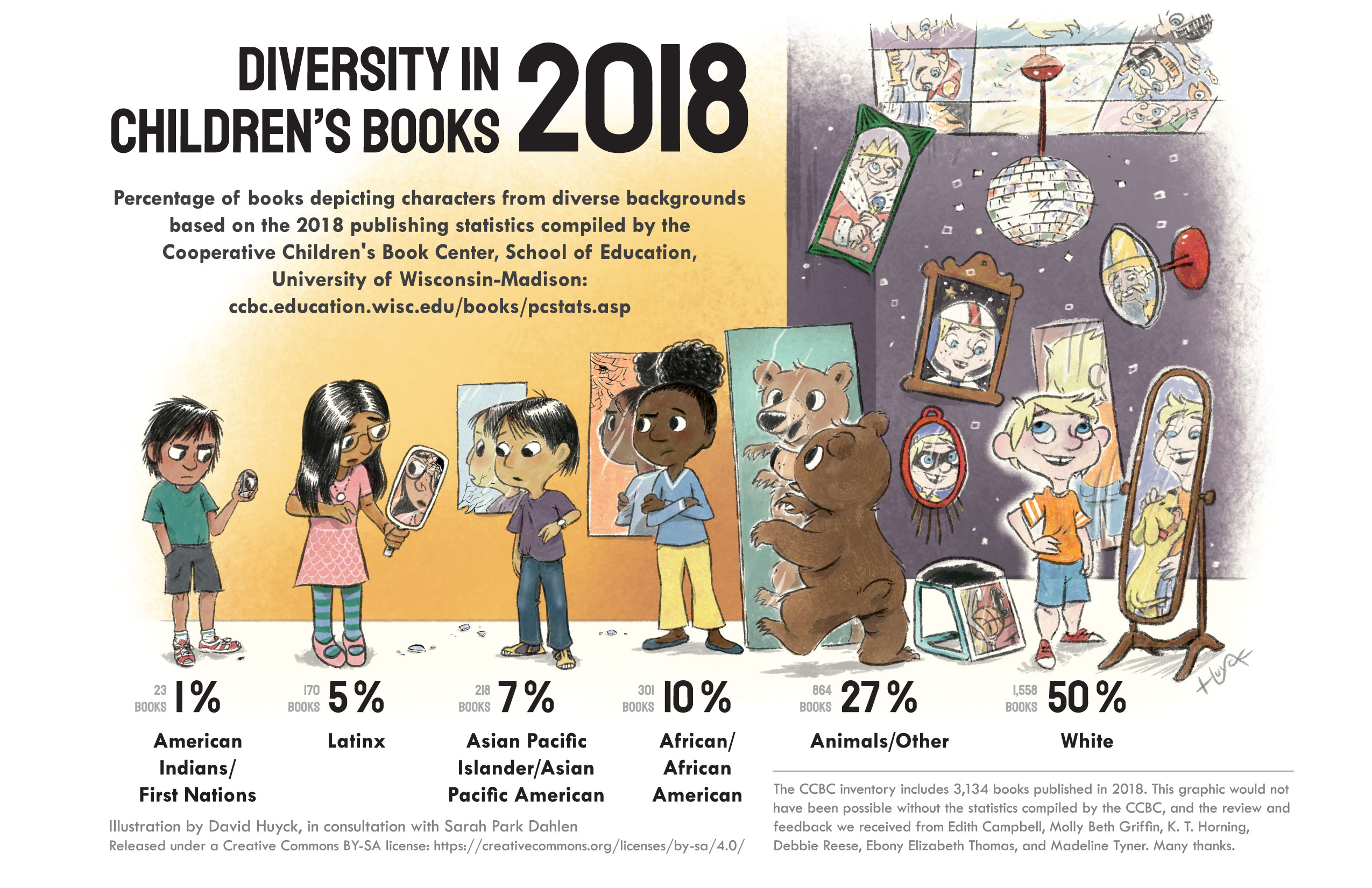 Diversity in the world of books and publishing has increased over the last few years – but the industry is still unrepresentative of the United States as a whole. According to a 2019 survey, people working in publishing are 76 percent white; 6 percent Latinx, Latino or Mexican; and 5 percent Black.

The library profession is even more unrepresentative. According to a 2017 survey of members of the American Library Association, 87 percent of librarians are white, and 81 percent are women. Only 4.3 percent are Black.

What effect does this disparity have on the stories that get written, published, publicized, purchased by libraries, and finally, read? Activists in the children’s literature (or “kidlit”) community have been particularly active in raising this question, and demanding that more books featuring diverse characters be put into the hands of children.

The Cooperative Children’s Book Center at the University of Wisconsin-Madison reviewed thousands of children’s books published in 2015 and found that 73.3 percent featured white characters. More books featured animals or non-humans than featured any racial or ethnic minority.

The researchers repeated the exercise in 2018 and documented increased diversity. However, “Animals/Others” was the category with the biggest rise, from 12.5 to 27 percent of the books published.

Books can enable empathy toward – and understanding of – experiences and life circumstances other than one’s own. For members of depicted groups, books can also offer powerful proof that you are not alone – that your experiences and perspectives are seen, heard and validated.

From my own childhood, I can remember feeling that sense of recognition when I read books like Harriet the Spy, or From the Mixed Up Files of Mrs. Basil E. Frankweiler. The young, white, middle-class protagonists of these books reminded me of myself. Their neighbors and friends reminded me of my neighbors and friends. It was easy – perhaps too easy – to put myself into their shoes.

Mentally browsing the shelves of my elementary-school library, with its paucity of diverse stories, I can now recognize that I was experiencing a form of white privilege – and one with farther-reaching ramifications than one might initially think.

Would the school library have had such a powerful hold on me if it were devoid of stories I could recognize as my own? Lacking those stories, would I have developed into a strong reader and a successful student? Maybe yes, but maybe no.

“When children cannot find themselves reflected in the books they read, or when the images they see are distorted, negative, or laughable, they learn a powerful lesson about how they are devalued in the society of which they are a part,” wrote Dr. Rudine Bishop, an emerita professor of education at Ohio State University.

Children from dominant social groups have always found their mirrors in books, but they, too, have suffered from the lack of availability of books about others. They need the books as windows onto reality, not just on imaginary worlds. They need books that will help them understand the multicultural nature of the world they live in, and their place as a member of just one group, as well as their connections to all other humans. In this country, where racism is still one of the major unresolved social problems, books may be one of the few places where children who are socially isolated and insulated from the larger world may meet people unlike themselves. If they see only reflections of themselves, they will grow up with an exaggerated sense of their own importance and value in the world – a dangerous ethnocentrism.

While the publishing and library worlds have come a long way in recognizing issues of diversity and bias, that isn’t the same thing as solving them.

So we, as Newton Public Library staff, need to be purposeful about choosing materials that reflect a variety of perspectives, backgrounds and experiences.

We need to be cognizant of the publishing industry and the impact that industry has on the ideas and stories people can access through the library.

We need to reach beyond the “obvious” and plan programs and activities that engage and enrich our entire community.

And we need to be active as advocates for diverse fiction and nonfiction, including #OwnVoices stories where the protagonist and author share a marginalized identity.