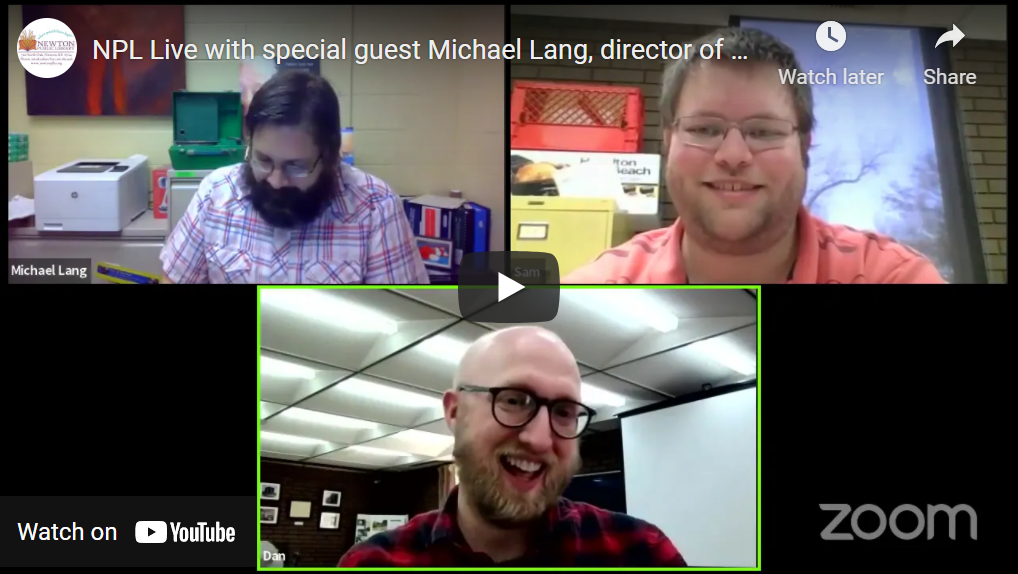 On the March edition of NPL Live, Dan and Sam welcomed special guest Michael Lang. Michael is director of Kansas Talking Books, a service providing personalized library support and materials to Kansans who are blind or otherwise print-disabled.

Watch the video above to learn more about Kansas Talking Books, and get book recommendations for this month’s featured 2021 Reading Challenge prompt: “Read a science fiction (or science fact) book.”

Here are the books mentioned during the broadcast. Click the titles to be “teleported” directly to NPL’s online catalog, where you can learn more about each item and put titles on hold for easy pickup!

Chambers, Becky. The Long Way to a Small, Angry Planet. Book 1 in the Wayfarers series. Joining the crew of the aging Wayfarer, a patched-up ship that has seen better days, loner Rosemary Harper must unexpectedly risk her life when they are offered the job of a lifetime, which teaches her valuable lessons about love and trust, and that having a family isn’t the worst thing in the universe.

Klare, Michael. All Hell Breaking Loose: The Pentagon’s Perspective on Climate Change. Science nonfiction pick! The author of Resource Wars reveals how the American military regards climate change as a top threat to national security and is developing new strategies for responding to catastrophic weather, droughts and food shortages.

Kroese, Robert. The Big Sheep. More than a decade after a vast section of near-future Los Angeles is disowned by civil authorities and rendered a third-world nation, eccentric private investigator Erasmus Keane investigates the theft of a valuable genetically-altered sheep. At the same time, a celebrity client disappears and reappears with no memory of having hired him.

Wells, Martha. All Systems Red. Book 1 in the Murderbot Diaries series. On a distant planet, a team of scientists is shadowed by its Company-supplied droid – a self-aware SecUnit that has hacked its own governor module and refers to itself (though never out loud) as “Murderbot.”

Pilkey, Dav. The Adventures of Captain Underpants. An Early Reader book. When George and Harold hypnotize their principal into thinking that he is the superhero Captain Underpants, he leads them to the lair of the nefarious Dr. Diaper, where they must defeat his evil robot henchmen.

Pilkey, Dav. Ricky Ricotta’s Mighty Robot. An Early Reader book. Ricky Ricotta, a small mouse, is being bullied at school, but when he rescues a powerful robot from its evil creator, he acquires a friend and protector–and saves the city from Dr. Stinky.

Preston, Douglas and Lincoln Child. Relic. Investigating a series of savage murders that are disrupting a massive new exhibition at the New York Museum of Natural History, graduate student Margo Green finds a clue in a failed Amazonian expedition.

Various Authors. Star Wars books. Newton Public Library has more than 100 novels and graphic novels that tie into the Star Wars universe! Click the link to view a cover photo album on Facebook.

Vaughan, Brian K. and Staples. Saga. When two soldiers from opposite sides of a never-ending galactic war fall in love, they risk everything to raise their child in a dangerous world. The graphic novel series is also on Hoopla Digital, available with your library card.

Wagner, John. Judge Dredd: The Complete Case Files. Since 1977, one man has dominated the British comic scene. He is judge, jury and executioner; a merciless far-future lawman delivering justice with an iron fist on the mean streets of Mega-City One. He is Judge Dredd!

Clarke, Susanna. Piranesi. Living in a labyrinthine house of endless corridors, flooded staircases and thousands of statues, Piranesi assists the dreamlike dwelling’s only other resident throughout a mysterious research project before evidence emerges of an astonishing alternate world.

Jemisin, N.K. The Fifth Season. After the empire Sanze collapses and the vast continent Stillness becomes ravaged by a red rift which darkens the sky, Essun, whose daughter has been kidnapped by her murderous husband, crosses Stillness in a desperate attempt to save her daughter.

Le Guin, Ursula. The Dispossessed. A bleak moon settled by utopian anarchists, Anarres has long been isolated from other worlds, including its mother planet, Urras—a civilization of warring nations, great poverty, and immense wealth. Now Shevek, a brilliant physicist, is determined to reunite the two planets.

Older, Malka. Infomocracy. It’s been twenty years and two election cycles since Information, a powerful search engine monopoly, pioneered the switch from warring nation-states to global micro-democracy. The corporate coalition party Heritage has won the last two elections. With another election on the horizon, the Supermajority is in tight contention, and everything’s on the line.

Palmer, Dexter. Version Control. A woman deals with a strange and persistent sense of everything being slightly off, which may or may not be related to her scientist husband’s pet project, a “causality violation device” that might actually be working.

Robinson, Kim Stanley. New York 2140. When a New York City of the near future is submerged by rising waters, the residents rapidly adapt the thriving metropolis until it becomes a vibrant, though permanently changed, canal region of island skyscrapers and remarkable inhabitants.

Stephenson, Neal. Seveneves. When a catastrophic event dooms the planet, nations around the world band together to devise an ambitious survival plan in outer space 5,000 years before their progeny organize an audacious return.