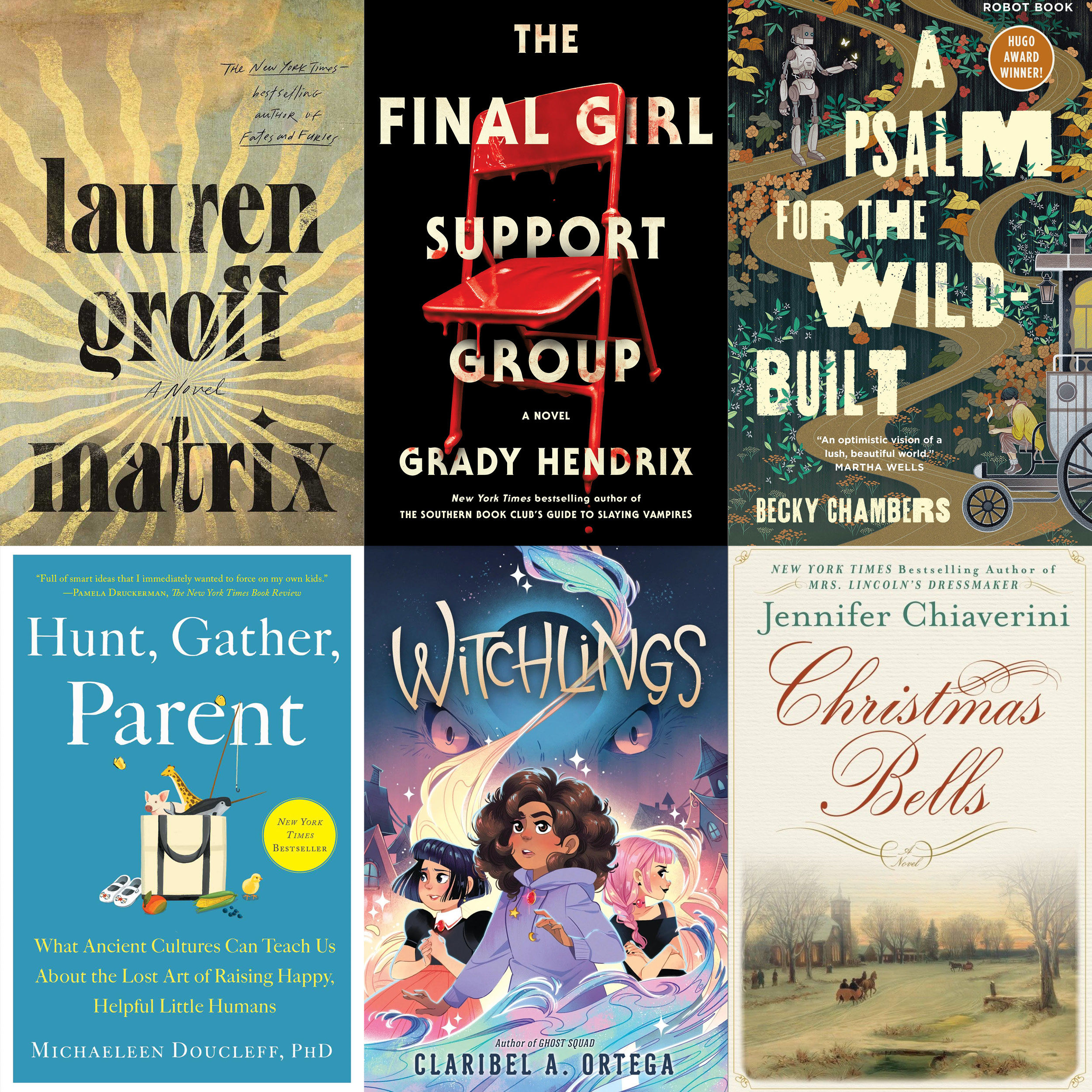 What a year it has been! Newton Public Library’s staff collectively read hundreds of books in 2022. Here are some of our favorites. Click the links to go directly to each book’s page in our online library catalog.

Chambers, Becky. A Psalm for the Wild-Built. “It’s been centuries since the robots of Panga gained self-awareness and laid down their tools, migrating into the wilderness and fading into myth and legend. One day, the life of a monk is upended by the arrival of a robot, honoring an old promise to check in. The robot cannot go back until the question of ‘What do people need?’ is answered. But the answer to that question depends on who you ask, and how.” Andrea’s Pick

Chiaverini, Jennifer. Christmas Bells. The frame story for this book is the writing of Henry Wadsworth Longfellow’s “Christmas Bells,” which became the carol “I Heard the Bells on Christmas Day,” one of my favorites. He wrote the poem out of tragedy in his own life during the Civil War. The book rotates between his story and a modern story in which a church children’s choir is preparing this song for a Christmas concert. Each section is from the point of view of a person who is there during  practices and how they are affected by it. Kristin’s Pick

Cutter, Nick. The Troop. Nick Cutter is one of the best horror writers since Stephen King, and this is one of the scariest novels I’ve ever read. “Leading a troop of boys into the Canadian wilderness for a traditional weekend camping trip, scoutmaster Tim Riggs encounters a disturbing, voraciously hungry intruder who infects the troop with a bioengineered disease.” Dan’s Pick

Doucleff, Michaeleen. Hunt, Gather, Parent. Doucleff, an NPR science writer and parent, embarks upon a journey to uncover how the cultures she’s encountered on her reporting assignments produce ostensibly fantastic children.  I was initially turned off by the title.  However, I appreciated the author’s honesty about the limitations of her own parenting skills and the conversations she recounts with other parents going about modern life in different cultural contexts.  If you take the hunter/gatherer approach to parenting advice, there’s plenty of good tidbits here to pick up and add to your basket. Sara’s Pick.

Groff, Lauren. Matrix. This beautifully-written novel imagines the life of the 12th century French poet Marie de France. Virtually nothing is known for certain about the real Marie’s biography. We know her name only because she includes it in one of her poems: “Marie’s my name; I come from France.” Groff references this (lack of) history in the novel’s arresting opening passage: “She rides out of the forest alone. Seventeen years old, in the cold March drizzle, Marie who comes from France.” Groff’s Marie becomes a nun, rescues her abbey from desperate poverty, and eventually becomes a powerful abbess and founder of a sort of proto-feminist religious community. Defying the usual plot structure of realistic novels, Groff’s Marie goes from challenge, to triumph, to greater challenge, to still greater triumph, in a continual upward trajectory. I found this novel thought-provoking, immersive, and a joy to read. And hey, I picked it for the Third Thursday Book Club to read for our 7 p.m. Feb. 17 discussion! Multiple copies of the book are now available for borrowing. Just ask at the circulation desk. Sam’s Pick

Hendrix, Grady. The Final Girl Support Group. A clever homage to 1980s slasher films. “A real-life “final girl”— the one girl always left standing at the end of a horror movie — Lynette Tarkington, who survived a massacre 22 years ago, along with five other final girls, works to overcome her past until someone becomes determined to take their lives apart again, piece by piece.” Dan’s Pick

Lansdale, Joe R. Radiant Apples. A clever, effective Western novella. “Nat Love has had enough adventures for ten men. Now, entering old age, he’s a train porter. An unlikely train robbery and a moment of bravery give him an opportunity to relive his past, and perhaps redeem his wayward son.” Andrea’s Pick

Ortega, Claribel A. Witchlings. A girl is trying to get into a witches’ coven. She finds out that she didn’t make the cut, so she has to complete an impossible quest, with two other girls, in order for them to form their own coven. This is a cute and fun middle-grade novel with curses, magic and friendship. Christa’s Pick.

Pilcher, Rosamunde. Winter Solstice. Choosing my favorite book of the year was a difficult task. I still have 17 books vying for a spot on my “top ten” list! I think I’ll go with Winter Solstice. This novel has everything I enjoy: an unusual setting, a cast of fascinating characters, lots of emotional depth, and a plot that could go many different ways. A great winter read! Sharon’s Pick

Sterling, Erin. The Ex Hex. This is a silly, funny Halloween rom-com book. “Nine years ago, young witch Vivienne Jones nursed her broken heart by putting a curse on her ex-boyfriend. She thinks it’ll just give him a bad hair day or two, but the “Ex Hex” turns out not to have been so harmless after all.” Andrea’s Pick.

Yousaf, F.S. Sincerely: Poems. This is a poetry collection that made me think – and made me feel kind of warm and fuzzy. Emma’s Pick