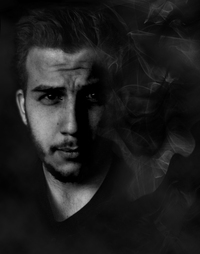 Witches be Crazy, the debut novel from Logan Hunder is a weird marriage of fairytale and contemporary storytelling. It reads a bit like a Monty Python skit, humorous parody.

The novel opens with a kingdom in peril; King Ik is dying.  A blacksmith named Dungar Loloth, after hearing of witchcraft dealings goes to Jenair to slay the new queen and save the kingdom. On his quest he is joined by a roving musician, Jimminy, who despite his obvious shortcomings, ends up being quite an asset on this epic quest. On their journey to Jenair the pair battle in the Gladiator area, fight pirates, outwit nymphs, stand trial in a town of Amazonians (my favorite), and face many other fantasy clichés.

The book is filled with puny exchanges and illogical timelines. I laughed through most of the book. Its absurdity was enough to allow me to suspend belief and not wonder about how Dungar was able to continue to progress on his quest without eating or sleeping.

Readers and watchers of Princess Bride, Monty Python, Shrek this is a book for you.

Author Note:  Logan J. Hunder is a humanoid creature that sits around eating Cheetos and playing Minecraft, occasionally stopping to write something down. After graduating from college he embarked on a journey to tell fun fantasy stories laced with action, adventure, and stupid jokes. (http://loganjhunder.com/)