Here’s what circulated the most in 2017 in CD format:

9. My Name is Lucy Barton by Elizabeth Strout

8. All by Myself, Alone by Mary Higgins Clark

7. The Black Book by James Patterson and David Ellis

6. The Wrong Side of Goodbye by Michael Connelly

5. Somewhere Safe With Somebody Good by Jan Karon

2. No Man’s Land by David Baldacci

and, cue the percussion …

1. The Whistler by John Grisham

In Playaway, (those amazing players, about the size of a deck of cards, that have one book on them), here are the top ten most circulated titles: 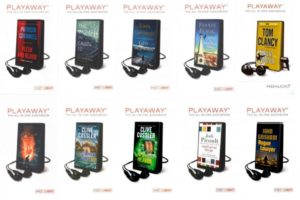 10.  Flesh and Blood by Patricia Cornwell

5. The Hidden Oracle by Rick Riordan

4. The Solomon Curse by Clive Cussler

3. The Eye of Heaven by Clive Cussler

and, cue the brass band …

We do like our John Grisham novels! And James Patterson and Clive Cussler and Tom Clancy! Also, since Young Adult titles are in the same audio collections as Adult titles, it’s of note that Rick Riordan’s “The Hidden Oracle” appeared at #5 on the Playaway countdown.